This is a dark book, with moments of light shedding rays of hope into dark places. People have different thresholds, different limits to how much they can endure. I know I have mine and I know where I would lose all hope. But J. M. Straczynski surpasses all these trials; a terrible childhood of impoverished circumstances and abuse that only shocks the senses.

We witness the struggle as he inches on as a writer of screenplays and comic books, towards his career in Hollywood; from The Twilight Zone and Changeling, to Babylon 5 and onto Netflix originals with Sense 8, and shows us how it’s done with perseverance, courage and determination. He offers essential writing advice throughout his personal story, advice which makes the book indispensable. 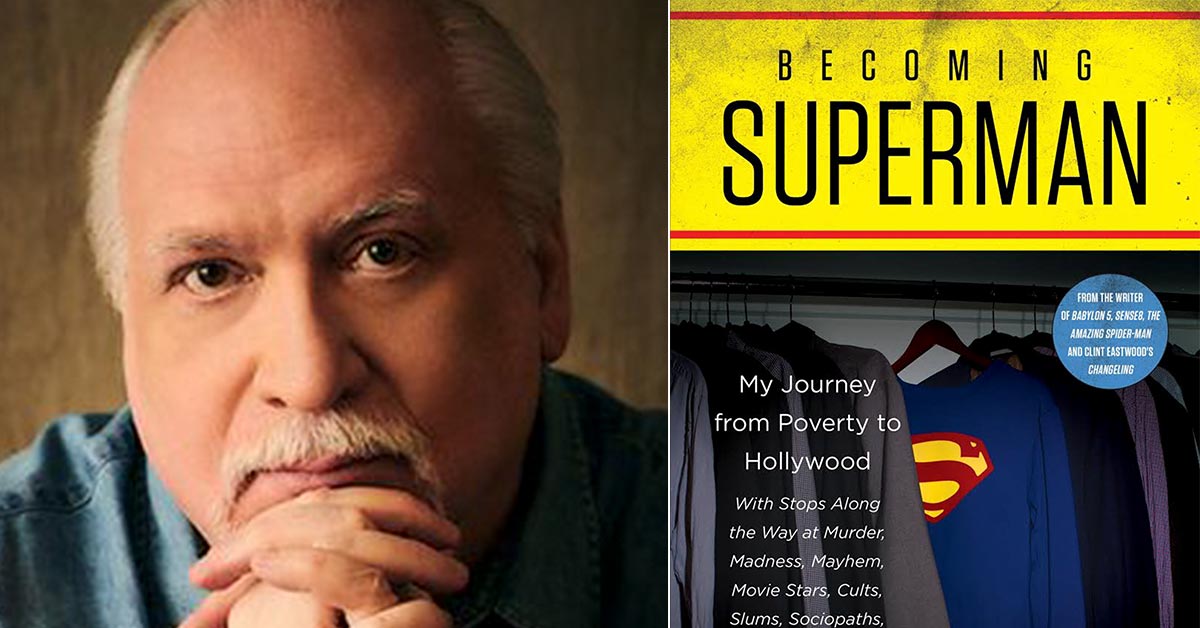 The story of becoming superman exceeds any story written before of the superman I’ve grown up to know and admire. J. M. Straczynski’s Becoming Superman is a life tale that goes well beyond the fictional account of Clark Kent and what we’ve come to know of him after he arrives from Krypton. For him, meeting Superman as a child was transformative.

But Straczynski’s biography is both inspirational and horrifying. A young boy raised by damaged adults, who must learn to survive. He finds refuge in comics and imaginary characters, where he discovers a world of superheroes whose special powers give them the ability to overcome their misfortunes. Here he makes a discovery that will change his life, a realization that change comes and can happen to the most unfortunate and emotionally devastated souls. Where Straczynski, a little boy whose story is part darkness and part creation, uncovers his own superpower. The ability to weave stories from the depths of his imagination and break free from within. From here the writer’s journey begins. A journey that takes us on a personal history of discovery, which up till now was veiled in mystery. J. M. Straczynski manages to keep a balance on the horror we discover in the mystery, with humor and intelligence.

My first and most noteworthy meeting of Straczynski’s work was Babylon 5, a story that encompassed a single-story arc across five seasons, a “novel for television”, with a defined beginning, middle, and end; in essence, each episode would be a single “chapter” of this “novel”. This was new territory for television, something we take for granted today with Netflix, HBO, Amazon Prime etc., but a great risk for TV in the early 90s. Not only did he take on this immense challenge, Straczynski wrote most of the 110 episodes, as well as the pilot and five television movies. On the journey, he constantly kept his viewers and fans updated online on the fan-run website, The Lurker’s Guide to Babylon 5. And this was in 1993, with the internet in its infancy! Yeh, I was one of the fans who after every episode would dial up the internet to learn more from the lips of our hero, Straczynski, who would post detailed analyses and answer fans’ questions. Oh, and by the way, The Lurker’s Guide is still alive and well today. A historical legacy and testament to what J. M. Straczynski achieved with Babylon 5.

Becoming Superman is a story with controversy and drama, but it never overwhelms you. Instead, it’s a tale of discovery and coming to terms with yourself, of breaking away from your past, no matter how ugly it was. A narrative that chronicles a journey to uncovering your true potential.

Ode to a Lost Explorer will be a free novel created in the science fiction universe of No Man’s Sky. The story will be suitable for fans and non-fans alike.

I’ll be updating here to let you know when the ebook will be posted. Stay tuned!